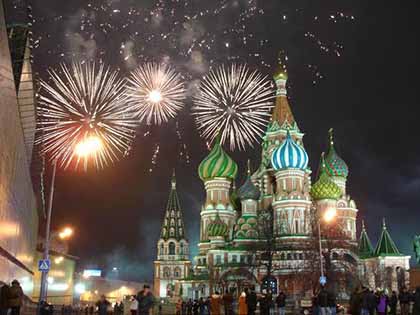 Learn about Russian tradition as you experience how they celebrate New Year’s Eve in the country.

Russia is a beautiful country. Its architectural structures are elegant, massive, and colorful, and they compliment the ambiance of its cities regardless of the season. Other than that, Russian women are known for their exquisite beauties and goddess-like figures, which is one of the reasons that so many foreign men visit the country every year.

However, the country takes on an entirely different level of beauty when New Year’s is about to approach, even more so on New Year’s Eve. The entire country becomes more alive, more colorful, and more beautiful indeed. It would definitely be a good idea for anyone to spend their New Year’s Eve in Russia. But whether you’re going to be spending it with your Russian partner, or alone but want to spend it in a magical place, then Russia is the place to be during this highly anticipated event of the year. Hence, here are the things you can look forward to as you experience Russian tradition and discover how people celebrate New Year’s Eve in the country:

New Year’s is indeed highly celebrated in Russia. In fact, part of Russian tradition during this time is that the people don’t return to work right after New Year’s Day. They return 12 days later. That’s how much time people are given to shake off the New Year hangover. As you get to learn more about Russian beliefs, you will find that every New Year’s, the people are to be spiritually and emotionally in touch with their families and loved ones. So do yourself a favor and be part of this magical event yourself. In fact, meet a Russian woman along the way! Date her, and get to be a part of her family’s New Year’s celebration. There you will get the chance to see the magic up close. If you wish to meet one beforehand, you can always sign up with Moscow Ladies today!