Moscow City: What To Love About Russia’s Capital 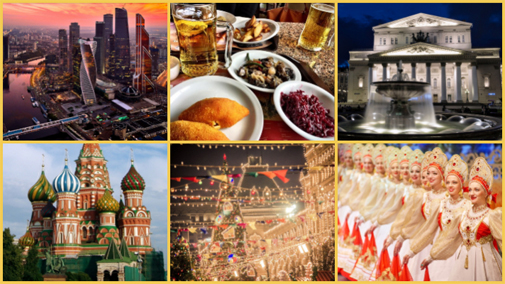 Discover and fall in love with Moscow city.

As the world’s biggest country, it is no surprise how Russia has many to offer. It gives its visitors a wide array of travel experiences. From the treks to the slopes of glacier-capped mountains to strolls along the shoreline of the Earth’s oldest lake, Russia is no doubt a wonder to explore. Apart from its natural wonders, it also boasts of a rich and interesting past that makes it a paradise for culture and history buffs. Among the many things and places to explore and experience in Russia, Moscow should be on your must-see list.

Moscow city is Russia’s largest historical, cultural and administrative city. There is an endless number of reasons why most fall in love with Moscow and below are just a few of these reasons:

As the capital, Moscow holds a great part in the history of Russia. You can travel through ages just by taking a walk on the streets of Moscow. It is famous for its enormous streets and neighborhoods that are packed with various historical, Soviet, Post-Soviet and even modern buildings. The diversified architectural styles waiting for you at every turn will leave you in awe. Each of these represents a traditional Moscow style that has been there for decades and some even for centuries. Its orthodox churches are just some of its architectural masterpieces to behold.

One of the reasons why Moscow has gained international recognition is its world-famous ballet and opera. No wonder it is coined as the “City of Theatres.” Only in this city can you find as many options for a theatrical evening as your heart contents with over 170 theatres. The most famous theatre in the country is the Bolshoi Theatre which shows Moscow’s elegance in both architecture and culture.

Most locals say that “Moscow never sleeps,” and this is a 100% true. Moscow’s Nightlife is a never-ending and fun experience. From dusk till dawn, you will hear the city beckoning for you to come out and play. Its local clubs, bars, and dance halls provide interesting options for its guests even on a Monday night. A fair warning, however, nightlife in this city might get you quite tipsy or perhaps drunk.

Moscow is also known for its huge number of high points and spectacular city views. Some say that the city is even more stunning when seen from above and you do not need to be in a helicopter just to see its magnificence for there are a lot of places in the city where you can see the city lights below.

The Russian cuisine is famous for its exotic soups, cabbage, schi and solyanka, which is made of assorted meats, pancakes with different fillings, and of course, caviar. Visitors are often surprised by the burst of flavor in their mouths once they taste Russian traditional food. It will certainly have you searching for its recipes. All these mouth-watering Russian dishes are available in the city whether you are it is on budget or Michelin-starred.

Among the many reasons why Moscow is visited by a lot of foreign tourists is its people. They are not just known for their model-like looks, but also for their personality and the Russian culture. They are very particular when it comes to Russian values and have upheld it throughout the years.

From Moscow city metro down to the Red Square to the Moscow Kremlin, the city is such a magnificent place to behold. It is endowed with such uniqueness and beauty that has its visitors’ hearts captivated. The city’s aesthetic is indeed a masterpiece of both man and nature, and one just cannot help but fall in love with it.